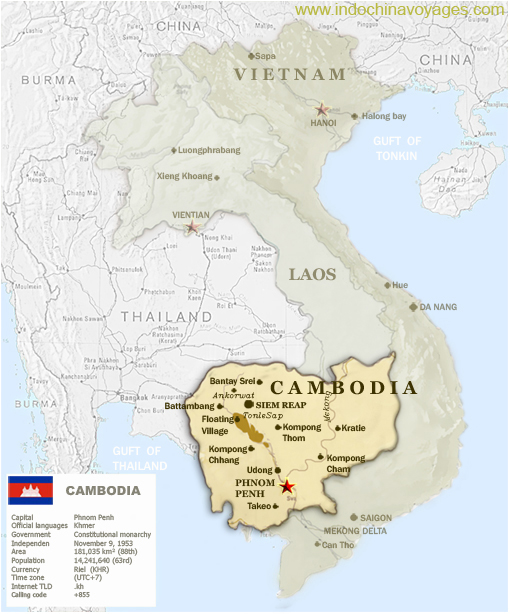 As the second largest nation in Indochina, Cambodia’s landscape is a blend of rice paddies, sugar palm plantations and remote jungles. While most visitors come to admire the magnificence of Angkor Wat or Bayon Temple, Cambodia also offers plenty of natural beauty and exotic culture for those willing to experience, let alone the late 70s’ dark history with the Khmer Rouge to be remembered.
Bordering the Gulf of Thailand to the southwest, Cambodia offers some lovely beaches near Shihanoukville while the north and northeast are mountainous sharing with Vietnam as part of Ho Chi Minh trails. Nowadays life in Cambodia is clearly distinctive from poor fishing villages on Tonle Sap Lake to modern shop malls sprawling around Phnom Penh, or from a nice and elegant town of Siem Riep to some dusty and bustling corners of the country’s capital.

Two monsoons feature clearly Cambodia’s climate. From November to April, a north-eastern monsoon brings cool air but little rain, while a south-western monsoon, which occurs from May to October, causes heavy winds and rains. During the summer rainy season, rains are likely to take place in the late afternoon.

Cambodia is the most ethnically homogeneous nation in Southeast Asia. More than 95 percent of its 11 million citizens are ethnic Khmers. Chinese Cambodians form the largest minority group, followed by Cham Muslims. Remote mountain areas are home to a number of smaller ethnic groups.
The dominant religion in Cambodia is Hinayana Buddhism.

The Kingdom of Funan covered much of present-day Cambodia from the first to sixth centuries, to be replaced by the even more powerful Kingdom of Angkor in the eight century. The legacy of this era is what draws most visitors to Cambodia today, from the 9th to 13th centuries, Angkor’s rulers presided over the construction of one of the most astonishing architectural masterpiece of the world. While more than 100 temples remain, these magnificent structures are but a mere shadow of the fabulous religious capital that once stood here. Hundreds of wooden palaces, houses and public buildings are long gone.
In 1864 the French mapped Cambodia to their colonies in Indochina. Independence was declared in 1953 but by 1969, the war in neighbouring Vietnam spilled over into Cambodia, as American and South Vietnamese troops invaded to attack northern Vietnamese forces that were operating in Cambodia.
On April 17th, 1975 a Cambodian resistance group, the Khmer Rouge, took control of the capital, and proceeded to implement one of the most destructive campaigns of social re-engineering ever recorded. As the Khmer Rouge wished to create a peasant-led, agrarian cooperative, Cambodia’s cities were forcibly emptied and people were resettled in rural labour camps. Anyone with foreign ties or education was liable and be executed. By the time Vietnam invaded Cambodia in 1978 and overthrew the Khmer Rouge, between one in four and one in six Cambodians were dead.
In the middle of 1993 the United Nations observed elections in Cambodia and the People Republic of Cambodia was born shortly after.

In Cambodia, revealing clothing is unacceptable off the beach. Shorts are generally fine, as long as they are not too short. People tend to dress as well as they can afford to, local people and children are often astonished by the dirty and tattered clothing worn by some travelers.
When visiting pagodas, temples or social interacting with monks, shorts and tank-tops are unacceptable. Your knees and shoulders should be covered. Footwear and socks must be removed in some pagodas. Shoes are usually removed upon entering private accommodation too.
In terms of behaviour, public displays of affection between men and women are considered a bit shocking. On the other hand, it’s perfectly normal for a pair of men or a pair of women to link arms or hold hands, which does not imply any signal of lesbian or gay relations. Upon meeting someone new, people may simply nod to each other or may shake hands. Using both hands to shake someone’s hand while greeting ”Sour sdey” is a warm gesture of respect.
Beckoning someone by crooking your finger is very rude. The correct way to call someone over is to wave at them or call their name. Keep in mind not to touch on the head of an adult locals as the head is considered the most important part in their body and spirit. Never mind if the locals sometime look at you and laugh or giggle, they simply curious about your ages and why you travel if you are a senior traveler. To ask for the payment in a restaurant or shop, call and pretend to write on your palm with the other hand as if you are signing for the bill.
Taking picture for a close up one should be asked prior to your click, other than that, don’t aks if you like other photo opps. People are normally a bit shy when a foreigners turn to them and ask something with a camera in hand and they simply turn away. That is why the trick is not to ask if it’s not a personal close up picture. Be aware… never shoot your camera at a funeral.

In general, Cambodia is very safe for travelers. Violent attacks are rare, although theft is sometime a problem. When possible, secure your valuables in the hotel safe. Remember to record your traveler’s cheque numbers and credit card information, just in case.
Do not leave your wallet or cell phone in the back pocket of your pants or anywhere else that’s easily reached (like an outer zip-up part on a backpack). Be especially vigilant in markets and other crowded places like ports and train stations.
Pick-pocketing and purse-snatching are more of a problem in Phnom Penh. Some thieves approach on motorcycles, grab your belongings and race off before you’ve realized what’s happened. Wearing valuable jewellery especially necklaces that can be easily grabbed is not advisable.
Use common sense and don’t walk alone after dark, both for visionary and safety problems. There have been many reports of muggings in Phnom Penh late at night. If confronted by a mugger, do not resist. Siem Riep is much safer. You are always better not to use motorbike taxis at night; ask your hotel or restaurant to call a reputable taxi firm which is always metered taxi.
Traffic is a bit chaotic, especially in Phnom Penh where vehicles flow seems to weave all around. If you choose to ride a motorcycle or bike, make sure you understand the driving culture quite a bit. When crossing the street on foot, move at a slow and steady pace with eyes contact. Never stop and step back suddenly since the motorist watching your pace from a far and measure their own speed. Just walk slowly and you will be safe.