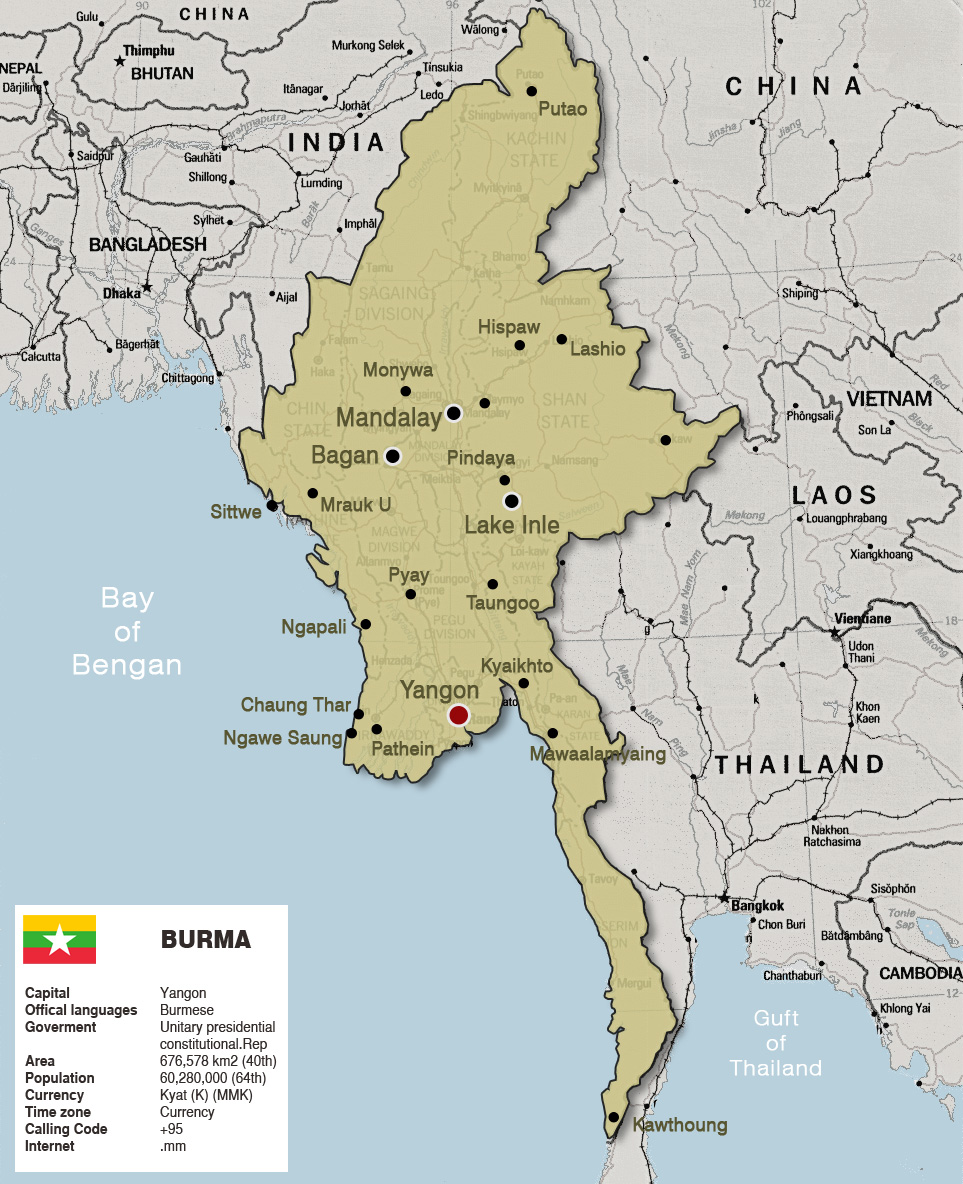 With around six million inhabitants, the small, land locked country has the lowest population density in Asia, largely due to its rugged terrain geography. Over 70% of the country is occupied by mountains that make up the name ‘country of million elephants’. Life is simple with Buddhism’s influence, making its people a bit laid-back and less business-minded. Daily life always seems to start late and end early. The Mekong river is the country’s heart and home to most of Laos people by its banks.

Laos has two seasons distinctively. The rainy season runs from May through October and the dry season from November to April. Most rain falls in the south. For the most part, Laos is hot, although there is a good deal of climate fluctuation between summer and winter temperatures at higher elevation areas. The capital, Vientiane, ranges from the mid-30s Celsius (mid-80s Fahrenheit) in April to the upper-20s Celsius (mid-70s Fahrenheit) in January. In the mountains, however, temperature can plummet to a near freezing point in December and January.

Laos has less than six million people, about half of them is Lao ethnicity. The Lao are concentrated in the Mekong river valley while people of Thai ethnicity live in upland river valleys. Other ethnic groups, including the H’mong and Mien, settle down in higher elevations.
Theravada Buddhism is the prevalent religion among lowland Laos, although many Laotians also practice Phi (animism) worship. Outside the Mekong river valley, the Phi worship is stronger still.

Laos’ rugged terrain made the establishment of large kingdoms impractical. In the 14th century a Lao warlord, Fa Ngum, founded the Kingdom of Lan Xang around what is now Luang Prabang. This kingdom split into three warring states in the 17th century, which had their capitals in Luang Prabang, Champasak and Vientiane today.
In the 1820s all three kingdoms came under Thailand control, but in 1839 the French signed a treaty with Siam and added Laos to their colonial empire.
Laos achieved independence from French rule in 1953. Peace was short lived, however, as the Americans began bombing Eastern Laos in 1964 in an attempt to target a section of the Ho Chi Minh Trail that passed through Lao territory. Fighting between the communist Pathet Lao and royalist government in Vientiane broke out, ending with a ceasefire in 1973.
In December 1975 the Pathet Lao took control in Vientiane, constructing the Lao People’s Democratic Republic nowadays.

In Laos, revealing clothing is unacceptable at all. Shorts are generally fine, as long as they aren’t mini short. People tend to dress as well as they can afford to, Laotian people are often astonished and laugh at the dirty and tattered clothing worn by some travelers.
When coming in pagodas, temples in Vientiane and Luangparbang, shorts and tank-tops are not recommended. Your knees and shoulders must be covered. Footwear and socks must be removed in some pagodas. Shoes are usually removed upon entering private accommodation too.
In terms of behaviour, public displays of affection between men and women are considered a bit shocking. On the other hand, it’s perfectly normal for a pair of men or a pair of women to link arms or hold hands, which does not imply any signal of lesbian or gay relations. Upon meeting someone new, people may simply nod to each other or may shake hands. Using both hands to shake someone’s hand with the word ” sabaidee ” is a warm gesture of respect.
Beckoning someone by crooking your finger is very rude. The correct way to call someone over is to wave at them or call their name. Never mind if the locals sometime look at you and laugh or giggle, they simply curious about your ages and why you travel if you are a senior traveler. To ask for the bill in a restaurant or shop, pretend to write on your palm with the other hand as if you are signing for the bill.
Taking picture for a close up one should be asked, especially when talking with the monks in Buddist temples, other than that, don’t aks if you like other photo opps. People are normally a bit shy when a foreigners turn to them and ask something with a camera in hand and they simply turn away. That is why the trick is not to ask if it’s not a personal close up picture. Be aware… never shoot your camera at a funeral.

In general, Laos is very safe and the Laotians are the most friendly people. Violent attacks are none, although theft might sometime be a problem. When possible, secure your valuables in the hotel safe. Remember to record your traveler’s cheque numbers and credit card information, just in case.
Do not leave your wallet or cell phone in the back pocket of your pants or anywhere else that’s easily reached (like an outer zip-up part on a backpack). Be always vigilant in markets and other crowded places like ports and train stations.
Pick-pocketing and purse-snatching are rare in Laos but you never know what might happen in the crowded market or any public gatherings . Wearing valuable jewellery especially necklaces that can be easily grabbed is also not advisable.
Use common sense and don’t walk alone after dark, both for visionary and safety problems. If you are not lucky to be confronted by a mugger, do not resist. Though the tuk-tuk (a kind of public taxis) is cheap and good for local economy, you are better not to use at night, ask your hotel or restaurant to call a reputable taxi firm which is always metered taxi.
Traffic is not of chaos, especially in Vientiane but Luangprabang is a bit crowded to walk in the evening. If you choose to ride a motorcycle or bike, make sure you understand the local driving culture quite a bit. When crossing the street on foot, move at a slow and steady pace with eyes contact, there you go.