An annual festival that features the cultural colors of Vietnam’s 54 ethnic groups through their New Year celebrations will take place at the Culture-Tourism Village of Vietnamese Ethnic Groups in Hanoi from February 15-17.

During the event, which will be hosted by the Ministry of Culture, Sports, and Tourism, visitors can take part in a wide range of cultural activities. 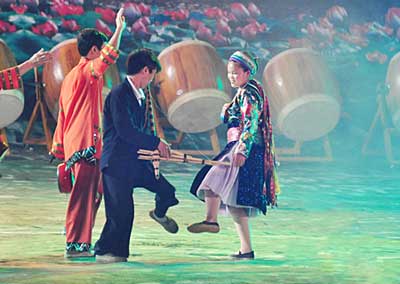 They will include a right to pray for peace, favorable weather and a good crop of the Lo Lo ethnic minority group in the northern mountainous province of Ha Giang and a festival to welcome the New Year of the Dao ethnic group in Hoanh Bo district of the northeastern province of Quang Ninh.

In addition, the New Year celebration of the Thai people and the gong festival of the Muong people in northern Hoa Binh province will also be presented at the event.

The highlight of the event will be a traditional New Year horse race of the H’Mong ethnic group in Bac Ha district, northern mountainous Lao Cai province.

The festival is expected to lure tourists to the tourism village, located 40km west of Hanoi.

It is also to honour outstanding individuals who have made contributions to preserving and promoting the values of the country’s traditional cultures.
(Source: VNA)