Xoe Dance has long been considered as a cultural and folklore activity of Thai ethnic people in Mai Chau. Visit Mai Chau, you will have a great chance enjoy a traditional Thai dance performance of Thai ethnic young girls with unique dance which bearing deep of charming and graceful dances

Xoe is the common name of different dances including “Xòe chá”, “Xòe ồng bổng”, “xòe kiếm”, “xòe đánh máng”, etc. All of those dances are originated from labor and production activities as well as daily living practices of local people. For example, the dance “Xòe ồng bổng” is an ancient dance of Thai ethnic group in Mai Chau with simple movements in which people holding hands and dancing around a big fire to celebrate the fruits of after a hunting day. You will easily find out that the main characteristics of this dance are the performers wear their casual costumes and there is no instrument, just the singing of Thai ethnic people and the cheering sounds when they enjoy simple but strong, fun and liberal movements.

There is also a different dance which travellers often enjoy in Mai Chau, named “Xòe đánh máng”. This unique dance is dedicated for women only. Dancers are divided into three groups of two and each group hold two pestles and hit them onto the trough used for pounding rice to create strong rhythmic melody

Recently, in Lac Village and Pom Coong Village, there are nearly 10 teams which regularly practice traditional Xoe dances to perform as a cultural activity in those villages and also to attract travellers visit Mai Chau. Almost every old Xoe dance has been modified and become attractive dance with eye-catching movements, props and accompanying music. Those team which included Thai local ethnic people can not only perform for travellers as a great tourist attraction to increase their income but also preserve, promote their ethnic cultural identity. 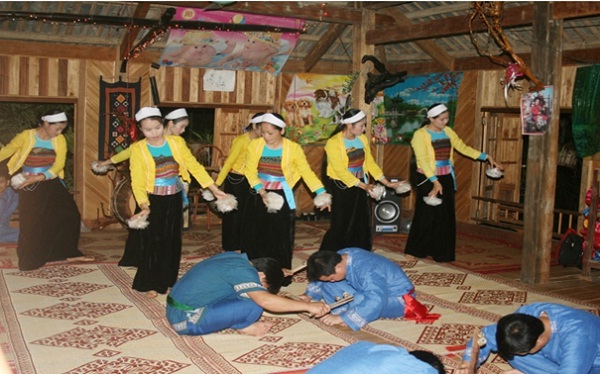 Xoe dances have been modified with eye-catching movements

Coming to Mai Chau when the drums, gongs have been sublimated is the time traditional Xoe dances of Thai ethnic people are being performed, as beautiful as iridescent flower