Filled with history, marvelous architecture and awash in natural beauty, Cambodia is fast becoming a must see destination in South East Asia during Indochina Tours. The largest religious monument ever built, Angkor Wat is always an attractive destination with many travelers.  Situated between the Tonle Sap Lake and the Kulen Mountains in Cambodia, Angkor contains the magnificent remains of several capitals of the Khmer Empire. After the fall of the Khmer empire the Angkor temples were abandoned and reclaimed by the jungle for centuries. Situated amid dense rainforest and rice paddies, many of the temples at Angkor have now been restored and welcome over two million visitors each year.

Angkor Wat is the most magnificent and largest of all Angkor temples. The structure occupies and enormous site of nearly 200 hectares. A huge rectangular reservoir surrounds the temple; which rises up through a series of three rectangular terraces to the central shrine and tower at a height of 213 meters. This arrangement reflects the traditional Khmer idea of the temple mountain, in which the temple represents Mount Meru, the home of the gods in Hinduism.

Built under the reign of king Suryavarman II in the first half of the 12 century, Angkor Wat is the pinnacle of Khmer architecture. The famous bas-reliefs encircling the temple on the first level depict Hindu epics including the mythical “Churning of the Ocean of Milk”, a legend in which Hindu deities stir vast oceans in order to extract the nectar of immortal life. The reliefs, including thousands of female dancers, are carved into the wall of the third enclosure of the temple.

The Bayon temple features a sea of over 200 massive stone faces looking in all direction. The curious smiling faces, thought by many to be a portrait of king Jayavarman VII himself or a combination of him and Buddha, are an instantly recognizable image of Angkor. Built in the 12th century by King Jayavarman VII as part of a massive expansion of his capital Angkor Thom, the Bayon is built at the exact center of the royal city. The Bayon is the only state temple at Angkor built primarily as a Mahayana Buddhist shrine dedicated to the Buddha. 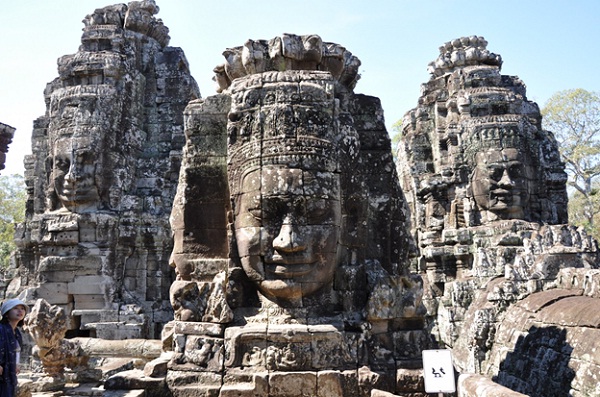 It rises through three levels to a height of around 43 meters. The outer gallery on the first level depicts scenes from everyday life and historical events; while the inner gallery on the next higher level depicts mythical figures and stories. Some of the figures depicted are Siva, Vishnu, and Brahma. The third level is where you will encounter many of the famous faces.

The last great capital of the Khmer empire, Angkor Thom (literally “Great City”) took monumental to a whole new level. It was built in part as a reaction to the surprise sacking of Angkor by the Chams. King Jayavarman VII decided that his empire would never again be vulnerable at home. Beyond the eight meter high walls is a massive moat that would have stooped all but the most determined invaders. The city wall has a sanctuary tower at each corner and five entry gates; one per cardinal direction plus an additional eastern portal, the Victory Gate.

The gates each feature a tower topped by four huge faces, similar to those at the Bayon temple. The most fascinating way to enter Angkor Thom is through the south gate. The causeway here is flanked by 54 gods and 54 demons depicting parts of the popular Hindu legend “The Churning of the Ocean of Milk”.

These suggested Cambodia tours will bring you to all of the magnificent Angkor temples: