The Island of Phuket Thailand is filled with various sites and attractions. From natural to man-made, from land-based to water activities, there is always something to visit and do on Phuket Island. The beauty of it all is that these wonders are all within a short driving or sailing distance from each other. Some places are really not worth your time, but others are absolutely a must-visit. Below is a list of top 5 best places to visit in Phuket.

Phang Nga is one of the must-visit places in Phuket. Situated in the marine national park, it is a spectacular landscape of approximately 40 Krast Islands that jut straight out from the calm green waters. This is a truly magnificent landscape to see with hidden caves, lagoons and vast mangroves channels to explore in your Thailand tours

A distinctive feature of Phang Nga Bay is the sheer limestone karsts vertically out of the emerald-green water.  Two of the more famous spots in this bay are James Bond Island and Koh Panyee. By far the best means of enjoying the spectacular scenery, with only brief encounters with the tourist crowds at James Bond and Koh Panyee, is to take one of the boat trips from the northern end of Phuket.

Phi Phi is approximately 50 minutes away from Phuket by speedboats. The islands consist of 2 small islands Phi Phi Don and Phi Phi Leh. Ferry ports and hotels can be found at first, while the latter is uninhabited offering magnificent beaches. Loh Sama and Maya Bay on Phi Phi Leh are the location for a Hollywood film “The Beach”. Thailand travel packages

Phi Phi Island is Thailand’s island-superstar. It is been in the movies and is the topic of conversation for travelers all over Thailand. For some, it is the only reason to touchdown in Phuket. Even with all the hype, it does not disappoint. Phi Phi’s beauty is a large chunk of the allure. The islands, when approached by boat, rise from the sea like a fortress. Sheer cliffs tower overhead, and then give way to beach-fronted jungle.

Thalang road, the historical heart of Old Phuket town, has saved most of its old Sino Portuguese houses and is now the best known street in town. Many shop-houses and mansions got refurbished, repainted or entirely rebuilt. Travelers find Thalang Road and Soi Romanee really nice, but you will find many little gems hidden here and there in the streets around.

Phuket’s Big Buddha is one of the island’s most important and revered landmarks. The huge image sits on top of the Nakkerd Hills between Chalong and Kata and at 45 meters high easily seen from far away. Visible from most places in the south of the island, the Big Buddha has become an important religious symbol for Buddhists on the island; as well a great tourist attraction with an amazing 360 degree view of the south of Phuket Thailand.

Close up to the image itself, it is very peaceful. The only noises you will hear are the tinkling of small bells and the yellow Buddhist flags in the compound, flapping in the wind plus soft background dharma music. Known among Thais as the Phra Puttamingmongkol Akenakkiri Buddha in full, it is 25 meters across at the base. The whole body is layered with beautiful white Burmese marble that shines in the sun, making it a natural symbol of hope. The views and the actual image itself are all breathtaking.

Wat Chalong (or Chalong Temple), located in the heart of Chalong, is considered to be the most important temple in all of Phuket Thailand. The temple built in the beginning of 19th century. It is the largest Buddhist temple in Phuket. Wat Chalong has been extending a warm welcome to visitors for over a century. Locals come to pray and Westerners come to learn something about Buddhism. The temple is open from seven in the morning to five in the afternoon. 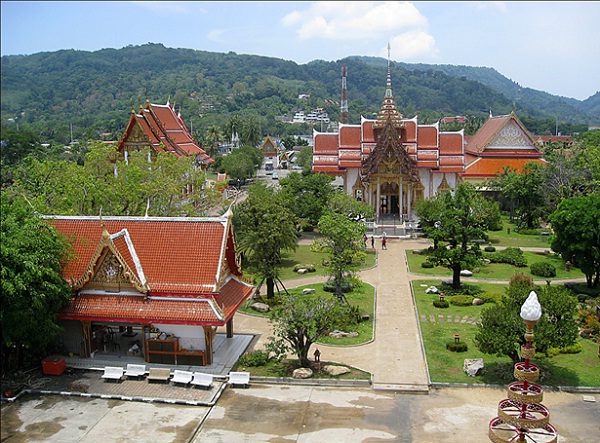 In Wat Chalong, Poh Than Jao Wat is one of the most important Buddhist statues. It is located in the westerly old hall of the temple, with two statues of an elderly gentleman called Ta Khee-lek, a famous local who won many lotteries after consulting the Poh Than Jao Wat statue. Another statue in this hall is called Nonsi. One of the temple’s halls features a gilt-covered statue of Luang Poh Cham and this busy hall also contains statues of Luang Poh Chuang and Luang Poh Gleum, all ex-abbots of the temple.

In spite of being such an important temple, the atmosphere of the place does not feel very religious. This is due mainly to the hundreds of tourists that flock to the temple every single day. Regardless of the crowds, it really is one of the top places in Phuket; and a definite must for any first time visitors to Phuket.

Phuket’s great advantage is that there is always something to do on and off the island; whether it is raining or shining. From the sublime to the seemingly profane, the range of activities and places to visit is remarkable for a destination of this size. Although Phuket has various attractions, those 5 best places are necessary to visit for any tourists when traveling in Phuket. Visiting top 5 places, you will truly experience Phuket’s beauty and attraction as well as have chance to learn more about history and culture of this island.