During your Vietnam itinerary 10 days, do not miss the chance to visit one of the most impressive sites in Da Nang City – “Cau Vang” or Golden Bridge Vietnam. Though its a newly-finished construction, the bridge has gained lots of attention from both domestic and international travellers due to its unique design.

According to The Guardian UK, Vietnam Golden Bridge in Da Nang is considered “a line of weird and wonderful structures” all over the world. Standing on the bridge, you will find yourself immersed in the magnificent view of green mountains. Why don’t you spend half a day exploring this Vietnamese masterpiece? 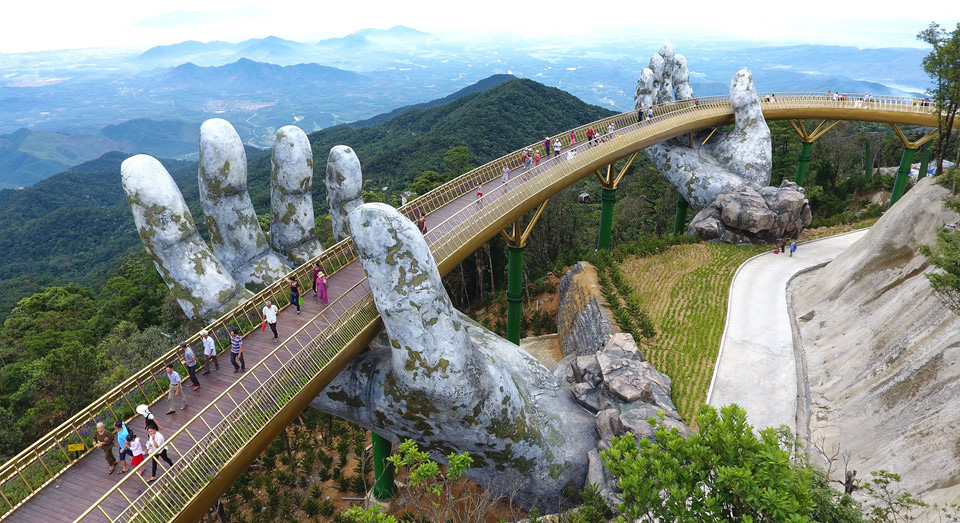 What makes the Golden Bridge Vietnam become the ‘hot’ site for tourists?

The Golden Bridge Vietnam was officially open to the public in early June 2018. Surprisingly, it has become very quickly one of the most favorite tourist destinations of Da Nang. It is where most travellers try to visit in their itinerary during Vietnam tours

It is strongly believed that the reputation of the Golden Bridge derives from its daring design; especially the support systems in the shape of a pair of giant hands. The bridge appears as a strip of silk held up by 2 massive stone hands. In fact, these hands are made from fibreglass supported by steel systems. Two stone hands were actually constructed recently; however, under the effect of weather, the bridge hands are now covered by moss; which creates an illusion of aged stone ruins as if they were built centuries ago.

Vietnam Golden Bridge sits more than 1,400m above sea level. Moreover, it was built 150-meter in length including 8 spans and 5-meter in width so this bridge is designed for pedestrian use only. Along the golden balustrades, there is a row of purple Lobelia Chrysanthemums planted as the highlight for the bridge.

Thanks to the dazzling design and the altitude, the Golden Bridge creates for visitors the illusion; that they can reach the sky while standing on the bridge.

What to do when visiting the Golden bridge?

Most travellers visiting the golden bridge, whether they go alone, with friends or with family, filming is one of the most common activities to capture the most memorable photos of the breathtaking scenery.

Additionally, the bridge is also an ideal place for pre-wedding photoshoots. During the daytime, Golden Bridge may be really crowded with thousands of tourists, so in order to have a perfect background for your photos, it is recommended that you book your stay in Ba Na Hill and do photography early in the morning and at sunset. As mentioned earlier, Vietnam Golden Bridge is a part of Ba Na Hills. Therefore, you will not only visit the bridge; but also have a chance to experience the most exciting mountain resort complex in Vietnam with a series of interesting activities.

Along the way from the foot of the hill to the top, besides the stunning landscape, there are also some interesting stopovers.

You will have an opportunity to participate in many thrilling games such as the Drop Tower, the Death Race, Outrun, 4-5D films, Skiver, Rock climbing, and dinosaur park; especially riding the Alpine Coaster which is one of the most played games. The coaster can reach a maximum speed of 40km; but don’t worry, each car is equipped with a braking system by which you can control the speed you want.

If you want to take photos with many celebrities, let’s go to the Wax Museum where you may find more than 40 well-known people including actors, footballers, president Obama, etc. Your dream of taking photos with your idol will certainly come true.

The French started to develop Ba Na as an ideal holiday location in the 19th century thanks to its peaceful and refreshing atmosphere. The village of Ba Na is a miniature France with many buildings such as squares, towns, churches, and hotels inspired by French architecture. You will actually feel like you are travelling to “the city of light”; because many magnificent castles surround you showing the culture and architecture of France. Why don’t you order a cup of coffee and sit on a French street to enjoy a life without the hustle and bustle of busy cities?

How to reach the Golden Bridge Vietnam?

It’s highly recommended that you should spend at least half a day exploring the Golden bridge and also Ba Na Hills. Normally, most travellers agree that the place is worth spending more time with. However, if you do not have plenty of time, a half-day is the most appropriate choice.

It’s about 35km from Da Nang city to the Golden Bridge. Otherwise, if you start from Hoi An, the distance from there to Ba Na Hills is approximately 57 km. The road to Ba Na is in good condition so you can reach there quickly.

There is the only way to get to the Golden Bridge from the foot of the hill. Therefore, after arriving in Ba Na, you take a cable car which has 4 Guinness Records. Travelling by cable car 5.8km, you will reach the top of the hill where the Golden bridge is located. Along the way to the top, you will be surprised by the specular landscape of the mountainous area, but sometimes, your visibility may be affected by the thick mist.

Some tips when visiting the Golden Bridge Vietnam

Make sure that you just pack really essential stuff in your bag as you will do a lot more walking than you think.

Situated at the altitude of 1400m, the cool weather in Ba Na Hills is a timely relief from the scorching Da Nang and Hoi An heat. You are suggested to bring a light jacket along with you while visiting Ba Na Hills.

A pair of flip-flops is not a good choice for your trip to Ba Na. You should have suitable footwear in order to avoid unexpected injuries.

In order to make sure that you have enough time to go through all parts of Ba Na hills including the Golden Bridge Vietnam, you should depart before 8 a.m.

Now, you may feel easy to see why the new-built construction of the Golden Bridge Vietnam has gone viral for such a short time. During your Vietnam itinerary 2 weeks or even less in 10 days, you definitely have many memorable experiences in several famous destinations along the “S-shaped” country. Your trip will be more perfect if you spend your time standing on the Golden Bridge to take a breath of nature. It’s worth every minute.